Why Ethnic Studies at De Anza?

The origins of Ethnic Studies began in 1969 at De Anza, with the establishment of Ethnic Studies as an interdisciplinary division.1 The nation was struggling with racial equity and justice late in the civil rights movement. In this moment, De Anza was intent on giving visibility and status to the college's Ethnic Studies programs by gathering all such courses into their own division.2

At the time, De Anza president, Dr. A. Robert DeHart, urged the college to create the Ethnic Studies division, recognizing the importance of such courses in leading to a major, an A.A. degree, and general education courses that “will emphasize contributions of racial and ethnic groups to this country and the world.” Rather than leaving individual divisions to develop their own courses relevant to Ethnic Studies, DeHart underscored, “We think it takes extra emphasis and thrust."3 This thinking was foundational to the creation of the Ethnic Studies division.

Urgency and Imperative of Ethnic Studies

Importantly, Dr. DeHart elaborated on the educational urgency and imperative of Ethnic Studies: “Institutionalized racism definitely exists, and we hope that a full ethnic [studies] division will attack this by exposing white students to other cultures.” The District Board of Trustees further affirmed that “it is becoming more and more evident that the mainstream culture also needs a program that will help them understand, appreciate, and accept the contributions minority cultures have made in this country.”

When the Ethnic Studies division opened in the fall of 1969, it was expected that 80 percent of the students taking the courses offered by the division would be racially identified as white, reflective of the student body demographics of the time.4

In many ways, De Anza’s leadership in trailblazing for Ethnic Studies has been unique. The earliest universities to institutionalize Ethnic Studies--San Francisco State University and University of California, Berkeley--were prompted by large-scale and prolonged student demands. De Anza College was founded in 1967. Two years later, De Anza decided to establish the Ethnic Studies division, in the absence of student protest demands. 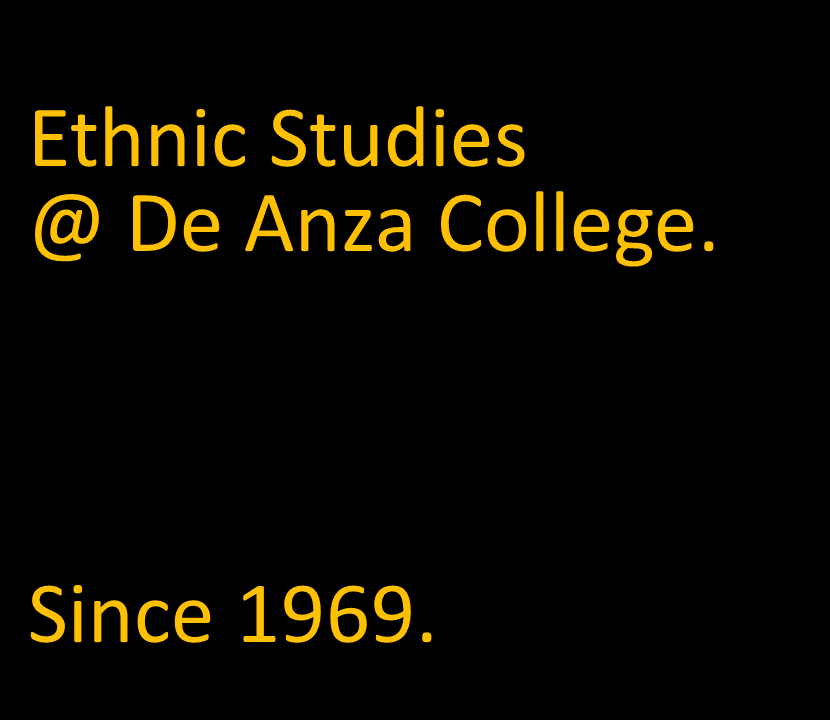 In Fall 1969, De Anza's Ethnic Studies Division offered its first three courses: History of Africa to 1600, Black American History, and Racial and Cultural Minorities in the U.S. The next quarter, five new courses were offered: History of the Chinese in the U.S.A., Black Economics, Black Sociology, Mexican-American Culture, and Mexican-American Literature. That same year, in 1970, the district board of trustees established Ethnic Studies as a requirement for the A.A. degree. In 1974, the division offered 42 courses. Annual student enrollment in the Ethnic Studies division grew from 127 in the first year to three or four thousand.6

To this day, few, if any community colleges across the United States, have an Ethnic Studies academic division.

Notably, the student body demographics of De Anza have changed since the founding of the Ethnic Studies division. This shift compels Intercultural Studies to recognize that students of color--those historically marginalized by race and ethnicity in the United States--are now the large majority of students to enroll in Ethnic Studies classes.

Critically, Intercultural Studies departments support and challenge these students in their intellectual, academic, and educational pursuits by engaging them in an Ethnic Studies curriculum that is conventionally absent from primary and secondary schools across the U.S. A research review of Ethnic Studies curricula published by the National Education Association in 2011 reported that:

Ethnic studies curricula are supported by a body of research documenting the relationship between racial/ethnic identity of students of color and academic achievement. Studies using different research methodologies, investigating students at middle school through university levels, in different regions of the U.S. consistently find a relationship between academic achievement, high level of awareness of race and racism, and positive identification with one’s own racial group.7

A 2021 study by Stanford researchers corroborates the positive impact of ethnic studies in high school.

A ninth-grade ethnic studies class has a remarkably prolonged and strong positive impact on students, increasing their overall engagement in school, probability of graduating and likelihood of enrolling in college, according to a new study of a curriculum offered at the San Francisco Unified School District (SFUSD).8

Ethnic Studies at De Anza serves a critical curricular and civic role in the education of all students, with a unique and deep history animated by the necessities of a society still grappling with widespread and entrenched forms of racial inequity and injustice.

Courses offered in the Intercultural Studies departments analyze systemic forms of oppression and address the intersections of race, ethnicity, gender, and other social formations of difference that have been historically deployed in creating systems of hierarchy in the U.S. and beyond.

The Intercultural Studies departments recognize the validity of multiple paradigms in the construction of knowledge, and encourage the integrated study of all aspects of the human experience. A deep philosophical commitment to self-determination is reflected in student-centered pedagogies and civic engagement opportunities that promote creative thinking about ways to combat social problems and disparities. Importantly, Intercultural Studies departments affirm comparative and interdisciplinary approaches to a vision of social justice focused on eliminating inequalities driven by racism and sexism.