Faculty, staff and administrators joined students, their families and friends to celebrate our 2010 graduates at this year's 43rd annual commencement ceremony on Saturday, June 26. 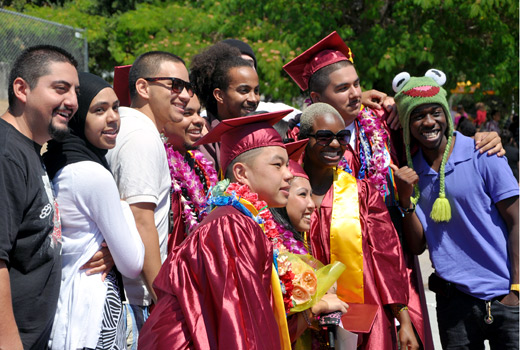 Arne Duncan joined President Barack Obama's administration as Secretary of Education in January 2009. He served for seven years before that as chief executive officer of Chicago Public Schools, where his mandate was to raise educational standards and performance; improve teacher and principal quality; and increase learning options.

During his tenure in Chicago, reading and math scores of the district's elementary school students reached record highs and the number of teachers achieving National Board Certification soared.

Duncan will also speak at the Foothill College commencement at 6 p.m. on Friday, June 25. In addition, U.S. Under Secretary of Education Martha J. Kanter will attend De Anza's and Foothill's ceremonies. She served as president of De Anza College from 1993 to 2003 and as chancellor of the Foothill-De Anza Community College District from 2003 to 2009.

"We are deeply honored to have the nation's top education leader, who has highlighted the critical role of community colleges, here at De Anza," said college President Brian Murphy. "Secretary Duncan will be a great inspiration to our students as we honor their passage to further education and new and better careers."

Michelle Lee of Cupertino is the recipient of this year's $2,000 A. Robert DeHart Memorial Scholarship for Service. She graduates with a 3.99 GPA and will attend Cornell University this fall, majoring in bioengineering/molecular biology.

Besides her goal of being a scientific researcher, Lee wants to teach, volunteer in child education and be a community leader.

The annual scholarship is presented in memory of A. Robert DeHart, founding president of De Anza College. It is awarded to a graduate who exemplifies service and participates in campus life relating to his or her personal values and goals.

President's Award winner Haig V. Haig of San José will attend UCLA in the fall, where he will major in biochemistry. Haig moved to the United States in 2005 from Iraq, where as a child he often awoke to the sound of gunfire and explosions. Inspired by his mother, a chemistry professor at Baghdad Pharmaceutical University, Haig learned to build molecular models at age 10. His goal is to help find a cure for diabetes.

Danielle Keene, also a President's Award winner, will transfer to San José State University to continue her graphic design studies. Keene has been on her own since her senior year of high school, moving to San José from Springfield, Mo., with one suitcase, to live with her aunt and attend night classes at De Anza.

Keene works as a special education teacher's aide at a local high school, where she acts as a translator, advocate, tutor, mentor and confidant for students. She is also a co-adviser for the Gay Straight Alliance at Los Altos High School. She volunteered for the Obama campaign as well as the No on Prop 8 campaign. Keene has been a member of the National Art Honor Society, Science Club and Student Council.

The President's Awards, worth $2,000 each, are presented annually to two graduating students who have overcome significant adversity or obstacles and have shown great perseverance in seeking an education at De Anza.

Environmental Studies major Michelle Chacon of San José was awarded a $20,000 Karl S. Pister scholarship to UC Santa Cruz for fall 2010. Chacon has worked as a teacher's aide at De Anza's Kirsch Center for Environmental Studies, served as a Spanish and French tutor, and belonged to the Outdoors Club.

Her community service includes being a translator in the ESL program at the First Unitarian Church of San José (Third Street Community Center), and fundraising for the EHC LifeBuilders, a network of emergency shelters in Silicon Valley.

Nursing student and San José resident Laura Belardes received a $5,000 Kaider Scholarship President's Award. The scholarship is made possible by the Steve and Lola Kaider Foundation to help students reach their goal of an associate's degree in nursing.

Belardes, a single mother of three girls, works as a birth recorder for Kaiser Foundation Hospital in San José. She volunteers in her daughters' classrooms and school trips.

Below is a gallery of photos from the 2010 event.