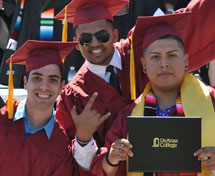 Faculty, staff and administrators joined students, their families and friends to celebrate our 2013 graduates at this year's 46th annual commencement ceremony on Saturday, June 29.

Approximately 1,400 students graduated from De Anza this year with degrees, and another 500 earned certificates in career fields.

Congratulations to all our graduates and their families!

Keynote speaker Jose Antonio Vargas is a Pulitzer Prize-winning journalist and the founder of Define American, a campaign that seeks to elevate the conversation around immigration.

In June 2011, the New York Times Magazine published a groundbreaking essay that he wrote in which he revealed and chronicled his life in America as an undocumented immigrant, stunning media and political circles and attracting worldwide coverage. A year later, he appeared on the cover of TIME magazine internationally with fellow undocumented immigrants as part of a follow-up cover story. Since then, he has moderated a White House Fireside Hangout on Google+ on President Obama's proposal for immigration reform, and testified at a Senate Judiciary Committee hearing on immigration reform. He is currently directing a documentary film on the undocumented experience.

He was a senior contributing editor at the Huffington Post, where he launched the Technology and College sections. Prior to that, he covered tech and video game culture, HIV/AIDS in the nation’s capital, and the 2008 presidential campaign for the Washington Post, and was part of the team that won a Pulitzer Prize for covering the Virginia Tech massacre. In 2007, Politico named him one of 50 Politicos to Watch. His 2006 series on HIV/AIDS in Washington, D.C. inspired a feature-length documentary — The Other City — which he co-produced and wrote. It world premiered at the 2010 Tribeca Film Festival and aired on Showtime. In 2010, he wrote an exclusive profile of Facebook founder and CEO Mark Zuckerberg for the New Yorker.

The media’s evolution, and the breakdown of barriers between print and broadcast journalism, has guided his nearly 13-year reporting career. He’s written for daily newspapers (Philadelphia Daily News, San Francisco Chronicle) and national magazines (The Atlantic, Rolling Stone) and has appeared on several national and international television and radio programs, including Nightline, The O’Reilly Factor, and The Colbert Report. On HuffPost, he created the blog Technology as Anthropology, which focuses on tech’s impact on people and how we behave.

He taught a class on “Storytelling 2.0” at Georgetown University and served on the advisory board for the Knight-Batten Award for Innovations in Journalism, housed at American University. A very proud alumnus of Mountain View High School ('00) and San Francisco State University (‘04), he loves jazz, hip-hop and anything by Gershwin.

Approximately 1,300 students will graduate from the college with degrees this year, with an additional 500 earning certificates in career fields. Graduates are transferring to numerous UC and CSU campuses and have been accepted to public and private universities nationwide, including the University of Southern California as well as Santa Clara, Columbia, Cornell, Boston and Drexel universities, among many others

ANGELICA "ANGIE" ESQUIVEL graduates with an A.A. degree in Liberal Arts with an emphasis on Math, Science and Engineering. She will attend UCLA in the fall, where she will major in sociology and minor in public health. She was inspired to pursue a career in the health field in part because her father dreamed of her becoming a doctor and helping the less fortunate, and because she has witnessed firsthand the health care challenges experienced by the undocumented community.

Esquivel's initial goal was to be a nurse, but she discovered that she would be ineligible because of her immigration status. When she learned from her counselor at De Anza about opportunities in public health, she realized that the field is an ideal intersection of her interests in health, politics, community involvement and social change. "I fell in love with the different possibilities because I'm able to continue to use the skills I've gained as a community organizer as well as remain in the health field," Esquivel says. "I want to be an educator and advocate for the resources people need in order to live a just and healthy life." At De Anza, Esquivel was an active member of the Integral Movement for AB 540 Student Success (IMASS) Club.

SHAILA RAMOS, graduating with an A.A. degree in Liberal Arts with a focus on Leadership and Social Justice, is transferring in the fall to UC Santa Cruz, where she will major in Peace and Conflict Studies. A student organizer in 2010 in support of the California Dream Act, her goal is to become a lawyer and establish a nonprofit to advocate for immigrant rights. Ramos served in leadership roles for the IMASS Club and the Higher Education for AB 540 Students (HEFAS) program and was elected executive vice president of the De Anza Associated Student Body (DASB) for 2011-12. She also was an intern in the college's Office of Equity, Social Justice and Multicultural Education, the Institute of Community and Civic Engagement (ICCE), and the Intercultural/International Studies (IIS) Division.

The initial group in which she participated at De Anza was the First Year Experience learning community. "I have been a strong advocate for higher education ever since I realized that my voice had power," Ramos says. "As an activist, community organizer and undocumented student, I have found my voice."