This year’s commencement speaker was Diego Gómez, a philosophy major and 2017 graduate, who said that being a student mentor and teaching assistant at De Anza showed him the importance of community and the potential for change.

Gómez is one of the two President's Award winners for 2017. He will be transferring to San Francisco State University this fall. During his time at De Anza, he worked as a mentor for the Men of Color Community program and as a teacher's aide for Chicano Studies. 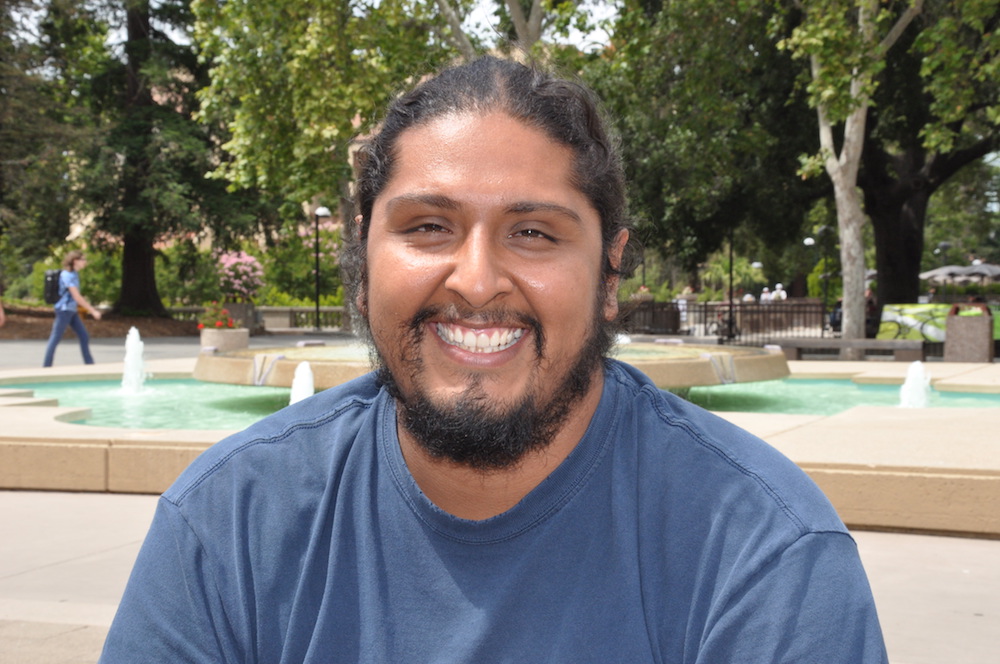 This year’s commencement speaker will be Diego Cihuacoatl Gómez, a philosophy major and 2017 graduate, who says that being a student mentor and teaching assistant at De Anza showed him the importance of community and the potential for change.

Gómez, 27, will be transferring to San Francisco State University this fall. During his time at De Anza College, he worked as a mentor for the Men of Color Community program and as a teacher's aide for Chicano Studies instructor Juan Gamboa. Gómez also has been a leader in the M.E.Ch.A. student organization.

He and Stephanie Dittrich, who will be transferring to the University of California, Santa Cruz, are this year’s winners of the President’s Award, presented annually to graduating students who have overcome adversity and shown perseverance in seeking an education at De Anza.

Gómez said he wants to give this message to fellow graduates: “Things always have potential to change. Though your life may be looking some kind of way, though your grades may be going a certain way, if you decide you want to change – even really slowly and really small – you can eventually change.”

That realization helped him raise his own grade-point average from 1.3 to 3.74 during his time at De Anza. Gómez said he wasn’t always a model student when he was in high school at Downtown College Prep, in San Jose, or during his first years of attending different community colleges. But during a two-year break from college, he became inspired while working as a classroom aide at an East San Jose elementary school.

The experience of being a role model for young pupils sparked a new drive within himself, Gómez said. He now plans to study philosophy at San Francisco State, with a minor in race and resistance studies, and eventually become a teacher.

For Gómez, a pivotal experience at De Anza came from participating in MC2, a new learning community developed by the Office of Outreach and Relations with Schools. Gómez joined the program, which provides support for male students who are Latino, African American or Pacific Islander, after he met MC2 counselor Umar Douglas on campus. As a student mentor, Gómez helped lead workshops and coached others who, like himself, sometimes struggled because traditional education didn’t seem relevant to their lives.

Through the MC2 program, Gómez met Gamboa, who encouraged him to help revitalize De Anza’s chapter of M.E.Ch.A., which works to support and empower Latina and Latino students. That also led to Gómez serving as a teacher’s aide. The work included helping lead class discussions, but Gómez said “probably the most important part” was creating a comfortable environment by establishing one-on-one relationships with students.

That’s important for students to succeed, said Gómez. He cited research he encountered at an ethnic studies conference, which confirmed, “when you are acknowledged and recognized in an academic setting, you just do better.”

Another influential experience came from an English class in critical reading and writing that focused on protest literature, including James Baldwin’s writing on race and other issues in America. “It changed my perception of academic writing,” Gómez said. “It really showed me the power of the written word.”

Gómez, who composes poetry himself, is now polishing his speech for the 2017 commencement ceremony. His audience will include numerous family members – parents, grandparents, siblings and nieces – who are planning to attend the big event on June 30.

The President's Award, worth $2,000, is presented annually to two graduating students who have overcome adversity and shown great perseverance in seeking an education at De Anza. 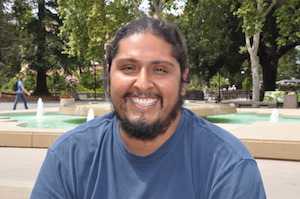 Diego Gómez, a philosophy major, is the 2017 commencement speaker.

He will be transferring to San Francisco State University this fall. During his time at De Anza, he worked as a mentor for the Men of Color Community program and was a teacher's aide for Chicano Studies.

Gómez is also active in campus organizations and composes poetry. 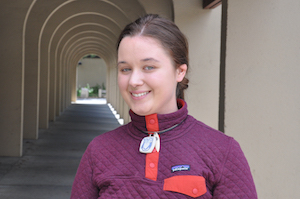 Stephanie Dittrich came to De Anza College after a long journey. Along the way, she overcame cancer and other health issues before she resolved to resume her education.

That journey led Dittrich from the Central Valley town of Modesto to De Anza’s campus in Cupertino, where she majored in liberal arts and pursued an interest in environmental studies. The 24-year-old is graduating this month with a 3.7 GPA and will transfer to the University of California, Santa Cruz.

Dittrich said she’s always been interested in nature. Spending time outdoors has helped her cope with past troubles, and she believes it’s important for the world to preserve biodiversity. But she hadn’t considered that field of study until she began taking classes at De Anza. “At my previous school we didn’t have an environmental studies department. I didn’t realize that was an option,” she said.

De Anza’s reputation as a top transfer school drew Dittrich to Cupertino. She moved to the Bay Area after deciding she needed to change her surroundings. In Modesto, although she had beaten cancer as a teenager, additional health problems led to depression and substance abuse, causing her to leave college there. Fortunately, Dittrich said she got help and overcame those issues.

“That was the lowest point in my life,” she said. But she decided, “there was nowhere to go from here but up.”

During her time at De Anza, Dittrich served on the DASB Environmental Sustainability Committee, started a group called Artists for the Environment and volunteered at an urban farming project in Sunnyvale. She also worked part-time as a nanny. She enjoys outdoor photography and teaching yoga.

Dittrich said De Anza’s academic program has prepared her for the demands of a four-year university. While studying here, she added, “I have met people and become close to people from so many different cultural backgrounds and from so many different countries. It has really expanded my mind, and my worldview, in a way that is just priceless.”

The A. Robert DeHart Memorial Scholarship, worth $2,000, is presented in memory of the founding president of De Anza. 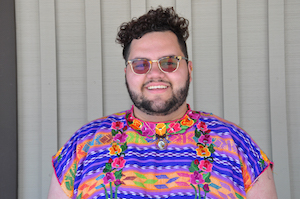 Jorge “Georgie” Güitrón says he used to worry about running out of gas as he drove, back and forth, from classes at De Anza to an off-campus job, volunteer activities and his home in San Jose’s Evergreen district. Both money and time were in short supply during his two years as a student here.

But Güitrón, winner of this year’s A. Robert DeHart Memorial Scholarship, says he was determined to defy expectations. “Men of color are often given the stigma that they can’t succeed in school,” he explained.“It’s important for me to change that narrative.”

Güitrón, a first-generation college student, will graduate this month and transfer to the University of California, San Diego, where he’ll major in sociology. He eventually wants to earn a master’s degree and become a teacher and social justice advocate.

The 20-year-old Güitrón credits De Anza’s faculty, staff and fellow students with helping him through his time in college. He had special praise for the Puente Project and Alicia Cortez, now interim director for Student Success and Retention Services. Puente is a learning community that provides counseling and other help for students from historically underserved populations.

“My parents didn’t really know the education system. So coming in (to De Anza), I didn’t know how to navigate the system, nor did I have anyone to turn to. I was kind of on my own until I got connected with Alicia at Puente,” he said. “These people are literally down for you, and they have your back.”

Through Puente, Güitrón was introduced to De Anza’s Office of Equity, Social Justice and Multicultural Education, where he worked part-time in the Jean Miller Resource Room for Women, Gender and Sexuality. He said he’s been proud to help organize conferences and exhibits that highlight diversity within the LGBTQQI community.

Outside school, Güitrón has volunteered with civic campaigns for affordable housing and other community issues. He also does volunteer work at the Sikh gurdwara, or temple, in East San Jose. Though he’s not Sikh, Güitrón said he was invited there by friends when he was growing up in the neighborhood, and he found it a welcoming and supportive environment.

In the future, Güitrón said he wants to be the one helping others, by building communities and advocating for those who have been marginalized in the past.

The Karl S. Pister Leadership Opportunity Awards Program was established to increase opportunities for community college students who want to transfer to the University of California, Santa Cruz. Awards are $10,000 per year for two years. 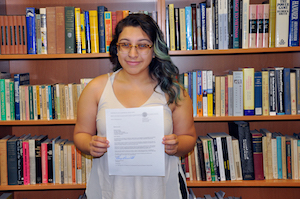 Suleima Ochoa is this year's winner of the Karl S. Pister scholarship. Ochoa will transfer to the University of California, Santa Cruz, this fall and plans to major in community studies.

The scholarship is awarded to community college transfer students who have overcome adverse circumstances and demonstrated commitment to assisting and improving the lives of others.

Ochoa, who lives in Newark, first confronted adversity as a child. After her father was falsely imprisoned, she said, she struggled to understand what had happened. The experience sparked frustration, bitterness and other emotions that troubled her for years. That struggle also made it more difficult to succeed in school.

At De Anza, however, Ochoa said she gained a community of supporters who have pushed her to succeed. Friends and teachers at the college have become her mentors. It wasn’t easy to keep up with work and school; she often balanced two or three jobs and a full load of courses. But Ochoa said she was inspired by those mentors to learn about social justice, gender equality and public policy, and to advocate for social change.

One early opportunity came through the Vasconcellos Institute for Democracy in Action (VIDA) at De Anza. Through that program, Ochoa worked with TRANSITion, a group that advocates for public transportation reform. She also worked with Fund Our Future on a campaign to increase state financial support for higher education. In addition, she joined Students For Justice, which encourages students to fight for social justice on and off campus.

Ochoa said her activism helped her develop a new self-identity and understand some of the systemic and socio-economic issues that had an impact in her life. Ochoa now works as an intern with VIDA and plans to continue her activism and work to help others when she transfers to UCSC.