The Vasconcellos Institute for Democracy in Action is named in honor of the late state Sen. John Vasconcellos, who was a tireless advocate for public education and student involvement in the democratic process. The program began at De Anza as the Institute for Community and Civic Engagement, or ICCE,, and was renamed for Sen. Vasconcellos in 2015. 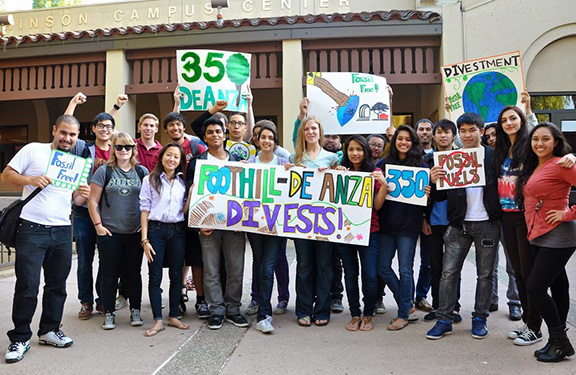 The original ICCE began with a task force of faculty and staff in fall 2005. The task force was initiated by De Anza President Brian Murphy, shortly after he took office, and was led by faculty members Jackie Reza and Cynthia Kaufman.

The task force was formed to research what kinds of engagement work were being done at other institutions and to analyze what work would be appropriate for De Anza. The task force completed its work in March of 2006, and delivered to the president a “Plan for De Anza’s Institute for Community and Civic Engagement.”

As a way to begin the work, some faculty and staff organized the first “Youth Voices United for Change” high school empowerment conference in spring 2006. In fall of that year, Rowena Tomaneng and Mayra Cruz were appointed co-directors and led the institute for the next three years, while building it into a powerhouse of civic engagement. Presently, the institute is directed by Cynthia Kaufman.

A History Of Social Justice

Before VIDA even existed, students have been involved in social justice education by sharing with each other through word of mouth certain instructors and courses with content that challenged the status quo and taught about systems of oppression. Since at least 2000, instructors like Cynthia Kaufman from philosophy, Nicky Gonzalez Yuen from Political Science, Rich Wood from Sociology and Carolyn Wilkins Greene from Intercultural Studies helped to provide a lens to think critically about the world. 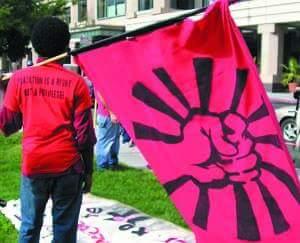 Students also found ways to get deeply involved in on- and off-campus politics and social justice activities. Back in 2000, clubs like Students for Justice, Muslim Student Association, MEChA, APAS and Earth Renaissance were each strong social justice places with different focuses and ideologies where students worked with each other to determine projects and campaigns that met their needs but also challenged the campus. These clubs also linked up to collaborate on bigger projects.

During the 2000-2004 time period, there were student demands to look more critically at the spending and layoffs due to budget cuts, a plea to stop the proposal to take off the intercultural studies requirement for fear of killing the department, and a focus on ensuring the bookstore was affordable and used non-sweatshop sources: Wherever there were changes being made at De Anza, students were ready to work with staff, faculty, administrators, board members and their peers to make sure the changes were for the good of students, and if their voices weren’t being heard, they were ready to attend meetings, protest and march, petition, organize a tent city, rent buses to bring multiple campuses to the capitol, or even dream up a new world with a multicultural festival.

De Anza’s mission statement now has language in it that speaks to providing a space for students to continue to make a stamp on the world. In 2013, Cynthia Kaufman worked with others to ensure “Civic capacity for global, cultural, social and environmental justice” was one of the core competencies written into the mission statement.  Additionally the college is committed to Civic Engagement for Social Justice, as described in its statement of Mission and Values:. 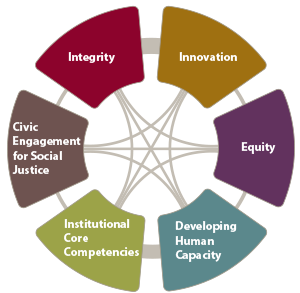 "We provide students with opportunities to enhance their potential for purposeful and productive lives. As a public institution, we contribute to the development of our local, state, national and global communities. We view our students and ourselves as agents of change, responsible for building the world in which all people are able to realize their dreams in ways that are environmentally sustainable and in alignment with the United Nations' Declaration of Human Rights."